Out of Hassocks Station, past the alternative-therapy \’Heeler Centre\’ (not a bad pun, apparently, but run by someone called Heeler), we followed the railway embankment south as far as Butchers Wood, then over to Clayton. 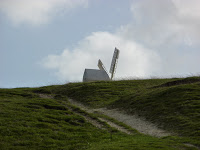 The Downs rose steeply ahead of us, the sails of the Jack and Jill windmills peeking bashfully over the sheep-filled horizon. Turning back, we could see the coloured counties, or at least Sussex, turning shades of ochre in the hazy autumn sun. Beyond the windmills, we crossed the South Downs Way, busy with walkers, dogs and horses, and skirted the edge of Pyecombe Golf Club.

We joined the Sussex Border Path as it led through a freshly ploughed field, the bare flinty earth gleaming black under wheeling seagulls.

Past the Chattri War Memorial, an incongruous Mughal-styled memorial to 53 Indian soldiers whose corpses were cremated there during the First World War, Sussex Heights and Brighton\’s seafront could be seen in the distance.

After a quick pint in Patcham\’s Black Lion, a plastic Harvester restaurant busy with squabbling families, we walked back in to Brighton on the London Road. At the south end of Preston Park, the remnants of Steve Ovett\’s despoiled statue provided a surreal footnote to the journey. 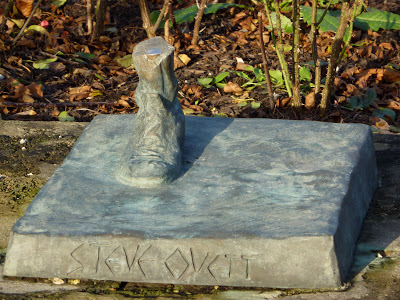