Sadiq Khan’s first 100 days in office – officially marked today – have given an indication of the character of his mayoralty. There has been none of the drama of Ken Livingstone’s 2000 triumph against the Labour party machine, and his subsequent battle against partial privatisation of the tube. Nor has there been the chaos of Boris Johnson’s 2008 election, with deputy mayors arriving and departing with a regularity that would be the envy of many London commuters. 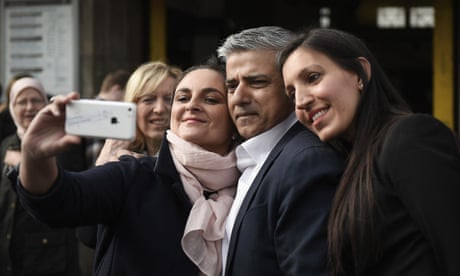 Instead, Khan’s arrival in office has been marked by a careful approach to appointments (taking care over these was Johnson’s parting advice to his successor) and astute leverage of the mayor’s public profile while the City Hall policy machine begins to grind through its rusty gears.

Launching a mayoral programme takes time, especially if you haven’t inherited much from your predecessor. Ken Livingstone, for whom I worked as private secretary for his first year in office, didn’t implement congestion charging until 2003 – three years after he was elected – with the Olympic Bid and London Plan following the next year.

In 2008, Livingstone wanted to return to office to implement free bike hire and collect the Olympic Flag from Beijing, but Boris’ election victory meant that these became his projects. By contrast, Boris knew he wasn’t coming back in 2016 – some would say he mentally checked out some time earlier – and left the cupboard pretty bare.

Khan has more than 200 manifesto commitments, and it has taken him time to appoint a team to focus on implementation, wrestling with the complex and only marginally coherent selection of agencies, strategies and duties that the mayor has accreted since 2000.

His appointments include a core group drawn from the campaign, including his chief of staff, David Bellamy, and policy directors Nick Bowes, Jack Stenner, Leah Kreitzmann and Patrick Hennessey. Observers describe them as a tight team who have worked together for a long time. There’s virtue in the familiarity and trust this engenders, but the experience of previous mayors suggests that not every campaigner can easily make the transition to administration.

Alongside them, Khan has appointed deputy mayors like Justine Simmons, James Murray, Val Shawcross, Sophie Linden and Jules Pipe. These are hardly household names, but are well known and generally well respected in London government circles. The mayor has also brought in outside experts, such as Rajesh Agrawal, tech entrepreneur and deputy mayor for business. The last few appointments are due to follow imminently, and the Centre for London has argued that they should include a chief digital officer to lead digital transformation across London government.

The mayor has made early announcements on air quality, which will be a priority area for action alongside housing, economic development, culture and social cohesion. The next big policy milestone will probably be in the autumn, when Khan sets out his vision for the new London Plan (which is unlikely to make it through its tortuous formal process, including public consultation and an ‘examination in public’, until 2019), and the other strategies that sit underneath it.

New rules on housing will be a big focus, and there are already background murmurings that Sadiq risks being boxed in by commitments on affordability. Some of these murmurings come from housebuilders and developers – and they would say that wouldn’t they? – but there clearly is some nervousness as the market feels the chilling effects of the post-referendum slowdown.

Meanwhile, the mayor’s team are focusing strongly on land held by Transport for London, which has the double challenge of needing to generate income to compensate for reduced government grant during a fares freeze, as well as meeting the mayor’s affordability policies.

But it is Brexit that has dominated the mayor’s first months. Khan moved straight from the mayoral campaign to the remain campaign, and since the referendum result has become the voice for London’s pro-EU majority, arguing for London to have a seat at the negotiating table, reforming the London Finance Commission to seek more local control of taxes, and broadcasting the message that #LondonIsOpen to the world.

This campaigning has been underpinned by a focus on London’s cohesion. As the first Muslim mayor of a western capital city, Khan cannot escape the focus on what he is as well as who he is. And he has been active in pushing a message of inclusivity, from the multi-faith theatrics of his acceptance of office in Southwark Cathedral, to his visible celebration of Gay Pride.

It is easy to dismiss campaigning and public appearances as froth on the serious business of governance, but in the fraught days of summer 2016, the mayor of London’s role in leading his nine million citizens is perhaps as important as providing them with services, initiatives and strategies. These will need to follow in time, and there are huge challenges ahead for London, but the mayor has made a sure-footed start.