What are Londoners like? Judging by recently released experimental Office for National Statistics data on spending patterns, we are a surprisingly healthy, even ascetic bunch. We each spend around £25,000 each year, 30 per cent more than people across the UK as a whole. But we spend much more on fish and fruit and less on cigarettes and alcohol; more on gym memberships, less on consumer goods. What do these figures really tell us about life in London?

The data suggest some patterns that will be familiar to every Londoner.  We spend an outrageous amount on housing, which accounts for more than £10,000 of the average Londoner’s expenditure every year – twice as much as the UK average. Transport spending is around £2,500 per year across London and the UK alike, but Londoners spend 60 per cent of that sum on transport services such as tubes, buses and taxis, while 70 per cent of average UK transport spending goes on buying and maintaining private vehicles.

The focus on services as opposed to goods is a common thread, and probably arises from a mixture of lifestyle choice and necessity. Modern consumption, we are often told, focuses on experiences rather than on accumulating “stuff”, which is lucky for Londoners, given the insecure tenure and Lilliputian accommodation that many have to put up with.

Londoners spend nearly 30 per cent less than others in the UK on recreational durables – cameras, hi-fis, TVs etc – but more on recreational and sporting services (gym memberships and tickets), and on hotels and restaurants. We don’t have the space for giant TVs or time to watch them, but we do have the almost limitless possibilities of London on our doorstep. The one item of home furnishings that Londoners do spend significantly more on is cutlery and glasses – even the most bijou flat can accommodate a David Mellor teaspoon.

But other aspects of the figures prompt questions. Why do Londoners spend so little per head on vices such as drinking, smoking and gambling (while level-pegging with the rest of the UK on drugs and prostitution)? Wouldn’t you expect a young city with packed bars and pavements to be spending more? Is it simply that Londoners are too hard-up?

That may be part of the answer. But London is not one thing, and there is no such person as an average Londoner. The city that celebrates hedonism and liberation is also the UK’s most religious place. The city with the biggest lesbian, gay and bisexual population is also the city with the lowest proportion of births outside marriage. The millennials who foreswear alcohol or meat for reasons of health or expense live alongside those who do so for religious or cultural reasons.

London mixes conservatism and liberalism in its society as much as in its politics. Diversity and openness to the world make London a city where anyone can live the life they choose. The spending patterns of Londoners illustrate how these myriad lifestyles can contrast but also overlap with each other. Full data below. 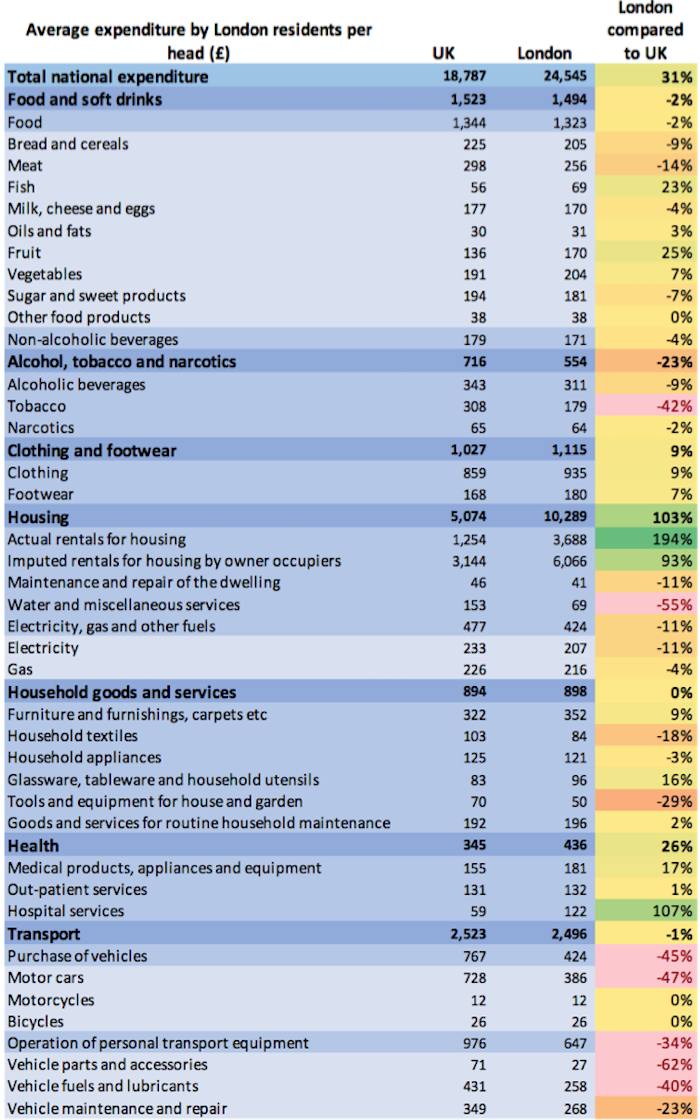 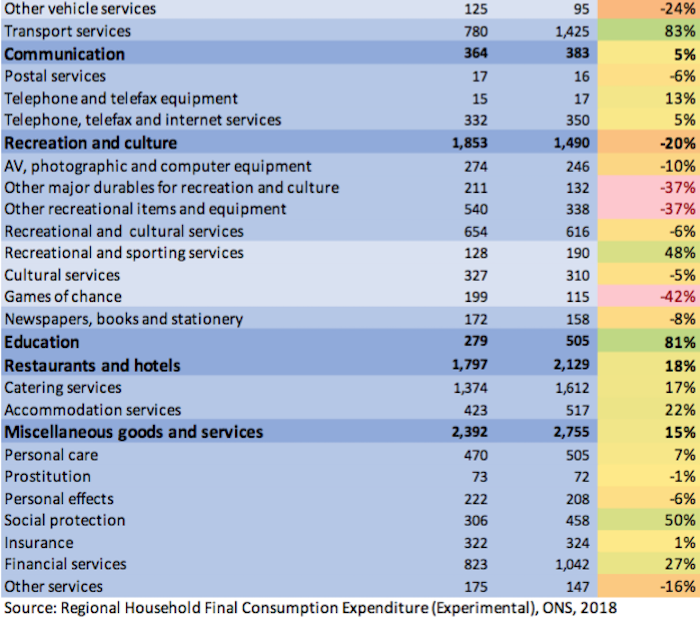